Is Laser Focus Trumping the Shenanigans? 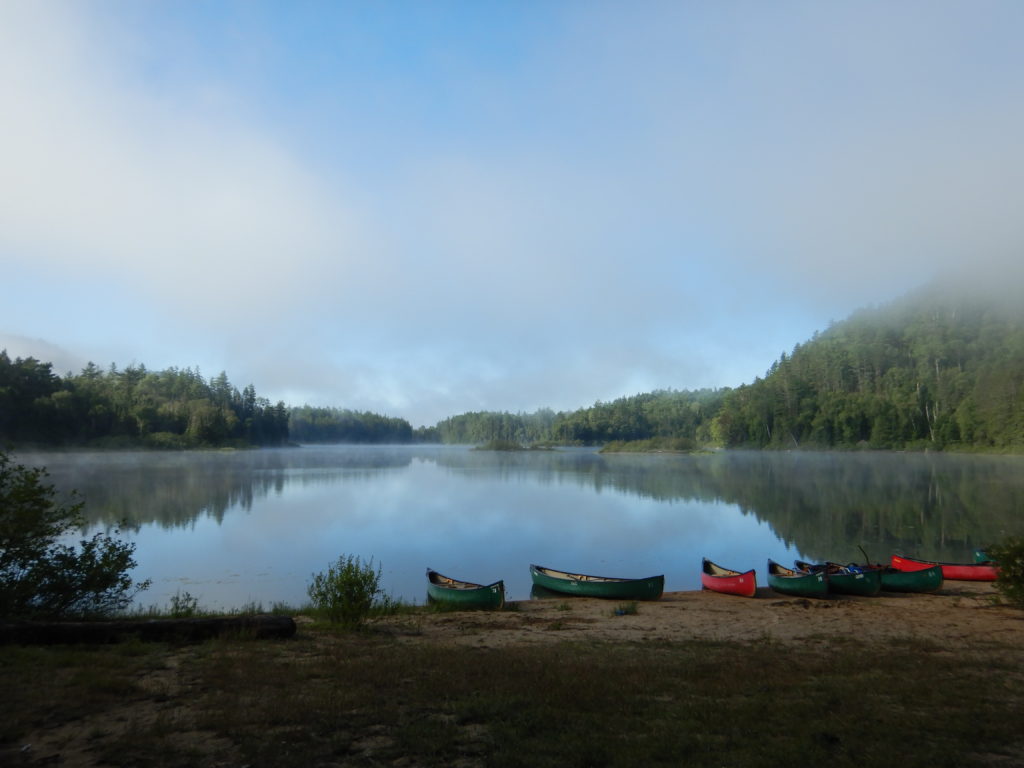 I travelled to the backwoods of the backwoods of the Dumoine River to deliver a package to your kids on Day 8 of their journey (last night). They had just arrived at their campsite after a day comprised of 10 kms of flatwater in a wicked headwind, and culminating in a 1.5 km portage.

I was expecting exhaustion and a hastily constructed MASH unit, tending to the wounds inflicted by the deer flies, as numerous and vicious as I’ve ever seen them.

Instead, I see James scurry down a small cliff to the campsite beach to greet me.  Apparently one of the teachers saw me paddling in the distance and referred to me as the “Master.” I hate that.

James got on his hands and knees and started bowing as if he is supplicating the Dalai Lama. “I’m not worthy”, he insists.

This bombast was contrasted the next morning, when James and his crew were about to descend the five Red Pine Rapids. In that moment, James had his game face on, ready to contend with an indifferent universe that cares not for adolescent hilarity. It was clear to me that this group can switch, in a heartbeat, from shenanigans to laser focussed intent.

Back to last night – I was bearing gifts. Fourteen Kit Kats and a honeydew melon, the size of which had me cursing the effort. But it’s fresh. At my age, charm is not enough.

The gifts were readily accepted by the tribe, and I was invited warmly into their wilderness lair.

I first encounter Abby and Viviana, the two lone gals amidst eight male versions of rambunctious. I shook their hands. Their grip was firm, and the eye contact was shy but mixed with a hint of warmth.

I ask, “How have you survived the fellas?”

They smile at each other. I glimpse the camaraderie.  “Not bad,” Abby says. Not bad can mean really sucky, or it can mean humility in the face of a victory. I was thrilled to perceive the latter. Those girls have forged a pleasant detente with the testosterone. Their turf is not to be encroached. What a life skill!

After I left, the kids constructed a sauna by the riverside. In thirty degree weather.

When the staff played Houdini this morning – an old leadership training trick where they disappear to leave the kids to fend for themselves – it was Abby that emerged as the leader.

This may not be an accident. The group is led by Ashley Strange, or “Stranger” to the kids. She is among the best leaders in Boundless history. I think about what a powerful role model she is the the girls, but also the boys.

There is a calm about this group. They take their obstacles in stride. The staff trust them. Which means they trust the staff. It is an exquisite dynamic to witness.

And they are utterly adorable.  Peter carried the team’s flag, along with Max, in their canoe. They were so cute it took my breath away.

The group was feeling strong this morning. They broke camp 15 minutes early, almost mocking Houdini. As such, they were emboldened. They cared and they succeeded.

My wife Lisa and I escorted them in our little green canoe to the head of the Rapids.

I was so green with envy, dwarfing the hue of one million trees the kids have to keep them company.

Parents, there are so many stories among this group. I can’t wait for you to hear them tomorrow.

It’s been such a pleasure to have them with us. Thank you.

← Oh, the Irony of Ironies Wrestling and Dresses Abound →